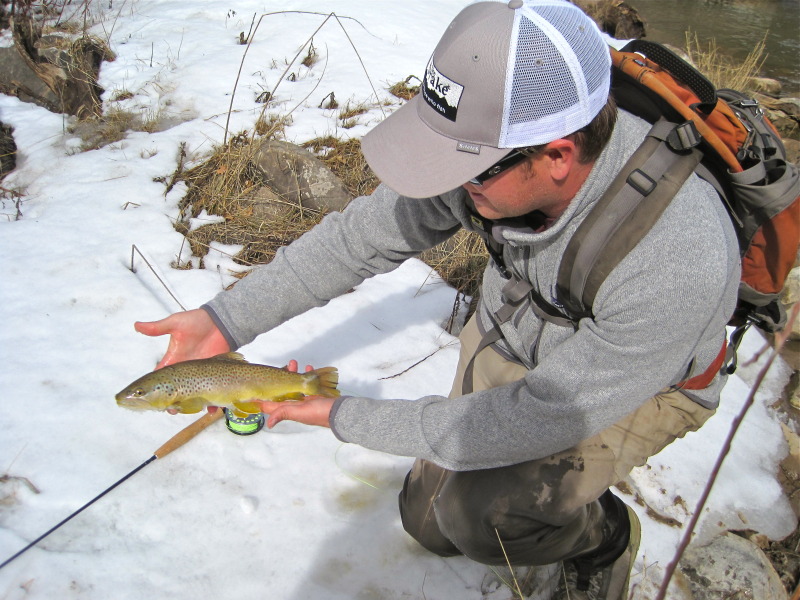 Back to real life… I’m posting this from our home in Arizona. The past few days have been crazy. We flew up to Northern Utah on Tuesday for my little brothers wedding and flew back last night. Yesterday was spent in Utah’s Backcountry with a great friend and an epic day on a special creek.

The creek we fished is an anomaly. It contains the normal Browns and beautiful native Bonneville Cutthroat, typical of sub alpine creeks and rivers in Utah. But as it tumbles down a steep canyon it picks up lots of oxygen and thus contains many species of stoneflies. These protein-packed bugs are the life blood of the creek. The trout eat them and grow big and strong. The reason you put in the huge effort to access this rugged place though is because of the Rainbow Trout. The Rainbows in the creek are few and far between but i’ve never seen a small one and they all know how to fight.

So up we went. Three miles and 1,500 feet of elevation change.

We tied on a large stonefly nymph and a dropper below that. I chose a smaller but still substantial Prince nymph. Keoni opted to drop a Higa’s SOS to imitate the many midges coming off. Right away we were into fish. Lots of Browns, some pretty Cutties, and a good 18 inch Rainbow.

The day passed quickly and I had a plane to catch. This whole adventure culminates in the last major pool in the canyon. Keoni was catching lots of fish in the pocket water but I hurried him along as I knew the last pool would be worth skipping some water.

When we arrived we saw fish feeding along the edges, there were a lot of them and because of this pools remote location i’m quite sure we were the first people to throw a fly at them in months. The fish responded. Keoni pulled three fish right away out of the bottom of the pool. I caught two right after. We kept casting a few feet further up pulling fish on nearly every drift. Most were smaller fish but some good ones came to hand. Sixteen was the final count by they time we finished working the entire pool.

We had forgotten to eat anything for hours. Tired and hungry we decided to sit stream-side and eat our lunch. The last time I had fished this pool I hooked a giant rainbow in the deepest part. I tired the fish as another buddy ran up river to net it. He didnt make it in time and the fish popped off right in front of me. We decided to let the pool rest while we ate and chatted then make one last attempt to catch the big rainbow we hopped would still be there. After a short 15 minute rest I make a cast and hooked a small Brown. Keoni followed and what happened next was something i’ll never forget. Seconds into his drift he set hook and the water exploded with silver as a huge stream bred Rainbow shook its massive head on the surface. That was followed by a series of gator rolls. Then the fish got serious and started rushing around the pool always staying on the bottom. Smaller trout were swimming almost out of the water along the edges trying to get away from the beast. I tried to net her at one point, she wasn’t having that and rushed back to the head of the pool. After several minutes of constant pressure on the rod she tired and I scooped her up with one quick dip of the net. We celebrated, yelled, high-fived and then took a few quick measurements and photos. She taped at just over 21″ and almost 15″ around. These measurements put her at around six pounds.

Keoni released the fish and she swam off strongly. It was good to get back home for a few days and spend time with family, friends, and backcountry waters. A big thanks goes out to all that made it happen.