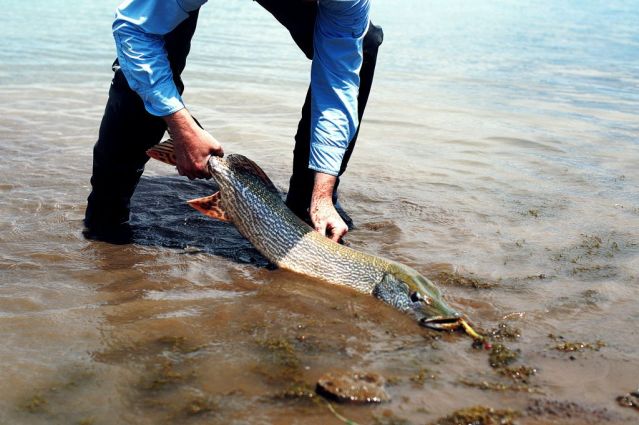 Pike on the Fly, AZ Style

Arizona is known for a lot of things but Northern Pike are not usually one of them. Thankfully we do have some high country here and the water stays cool enough year round to support a great populations of them. Yesterday four of us headed North from the valley. We spent the day fishing beefy fly rods, giant flies resembling deceased furry roadkill, and murky water surrounded by pines all with one thing on our minds… toothy Pike.

Pike are made for fly fishing. They live in shallow water, eat big things, and fight hard. Even a small fish will bend a rod over and peel line out of your hands with blistering speed. Not something usually experienced in fresh water fly fishing.

It was a great day with 22 to hand between all of us. We were lucky enough to have Matt along who besides catching the most and the biggest of the day, also took some amazing photos. Most of the shots below are his doing.

New-comer, and next door neighbor of mine, Denton has only been fly fishing for two months. He killed it yesterday bringing in a 32″ Northern on a fly he tied.

As I mentioned before, Matt took big fish honors this trip. He picked out a huge fire tiger rabbit fly, made a great bomber cast, and slowly stripped it back. The line suddenly went tight, the fish stayed deep and made three big runs. We all watched in awe.

Matt played the fish perfectly and after two failed grabs at the shore, I finally tailed it and the fight was over. We all cheered and snapped some quick photos. Fish measured 38 inches.

A true trophy Northern Pike. People spend thousands of dollars and travel to the remote far North of Canada for just a shot at fish like this. We released her back to continue the self sustaining fishery and so someone else may catch her at some point. The fish and game here would be happy to see all pike eradicated from the state as they compete with non native trout. We hope that never happens. This type of fishing beats the pants off of bait fishing for stocked rainbows. Hopefully the voice of our small group of anglers can be heard… LONG LIVE THE PIKE!