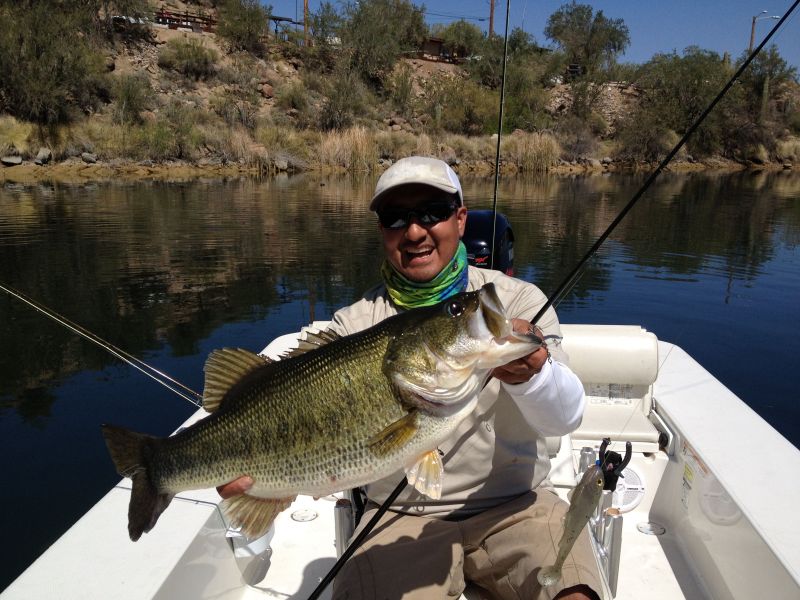 Largemouth with a Capital “L”

I could hardly stand the excitement as I tied the last big bugs for the morning trip. I was heading to Saguaro Lake with Manny the Master.

We met in Gilbert in the dark then drove the short distance to the lake. The forecast said 87* but it didn’t feel like it as we loaded the boat and charged up the lake at 57mph. Within minutes we were miles from where we started, trolling motor down, slowly picking apart the shallows for signs of fish on beds.

Before long we had our first fish in the boat. Although small, they were fired up and charged the flies that fell in front of them. Manny kept saying, “Oh here’s one and he’s spicy!”

As the sun climbed higher the shallows lit up allowing us to selectively target fish… bigger fish. We both got a couple between 3-5lbs weighed on the boga grip

What a morning! The thumb took a beating and the rod got a workout.

Manny said there was one more spot we had to hit. We slid in and scoured the water for dark shaped near the bottom. Manny spotted a fish and got really excited. She was deep, maybe 12 or 13 feet down but we stayed on her. We both took turns and changed flies many times. Manny finally found what she wanted. He set hook hard and in an instant she was up on the surface throwing water in every direction. I yelled, “I think she’ll go 10!”. Manny said nothing, he kept constant pressure on the giant and laid out for a quick grab of an enormous mouth. As soon as he did we both lost it. He quickly weighed her. Right at the magic double-digit mark.