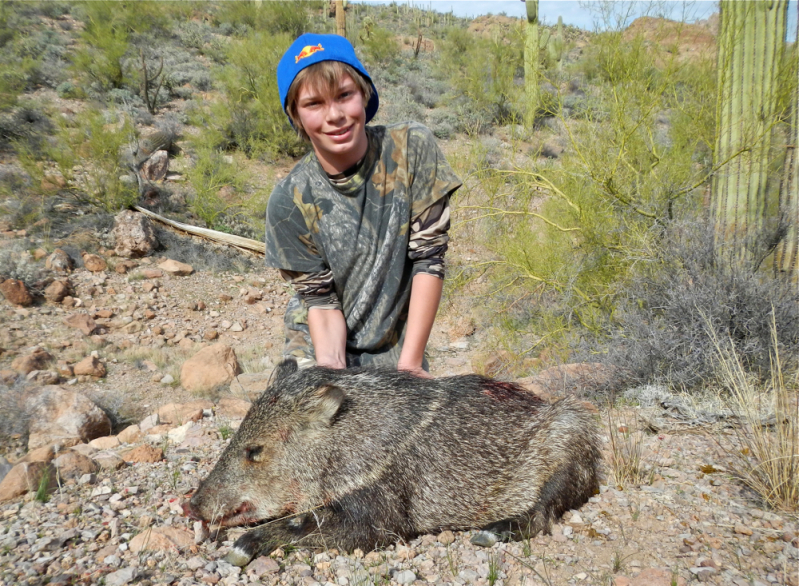 “I need to bring my boys down to shoot some pigs and get out of this place in the winter.” That was more or less what got this whole thing started. My cousins live in the sleepy town of Panguitch, Utah. Panguitch is not the typical southern Utah town with red rock and mild temperatures. It sits along the Sevier River valley, at 6,600 feet above sea level, and it gets downright cold.

My cousin Rob, known by everyone as Hazard, is a hard core hunter and has two boys who are all about it also. After a successful hunt last year for Javelina and with temps in Panguitch in the single digits for weeks, Rob let me know we needed to plan a hunt for the boys.

Over the past year we strategized, bought bonus points, and put the boys in for tags. The boys both drew a good unit and the waiting began. The day before the opener Hazard and the boys rolled into town in awe of the 6o degree temperatures and lack of snow. Apparently it was 40 below zero just outside of Panguitch the week before.

We got some rest and then woke up early and headed South to pig camp. My good friend Mike had a bunch of friends gathered and his Brother Jeff’s son would make the third boy with a tag. I felt pretty good about things as the weather was perfect, and we had a lot of talented hunters with one goal in mind. Get the young guns in front of some animals.

The desert was just beautiful as we cruised along old mining roads and got ourselves back into some classic Sonoran desert hills. 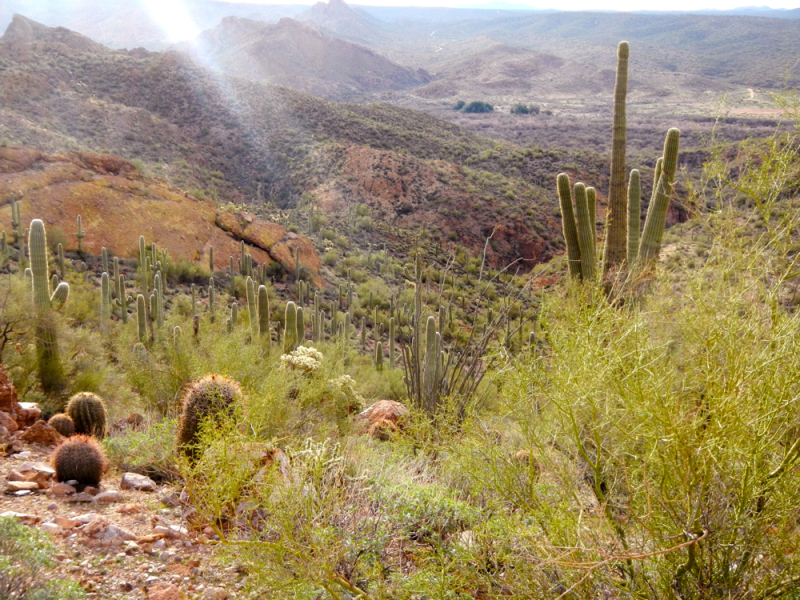 Within ten minutes a small group of Javelina were spotted and Jeff’s boy Brock was up for our first stalk. We were all excited as they got closer and closer to the herd and when Jeff whispered over the radio, “ok we see them”. We knew Brock was going to get a shot. Within minutes we heard the rifle fire. Brock missed his first shot but seconds later and at just 50 yards he dialed the scope in a young pig and put him down. Brock’s had a great year, he’s just 10 years old, and he got a nice little Coues deer this year and now a Javelina. 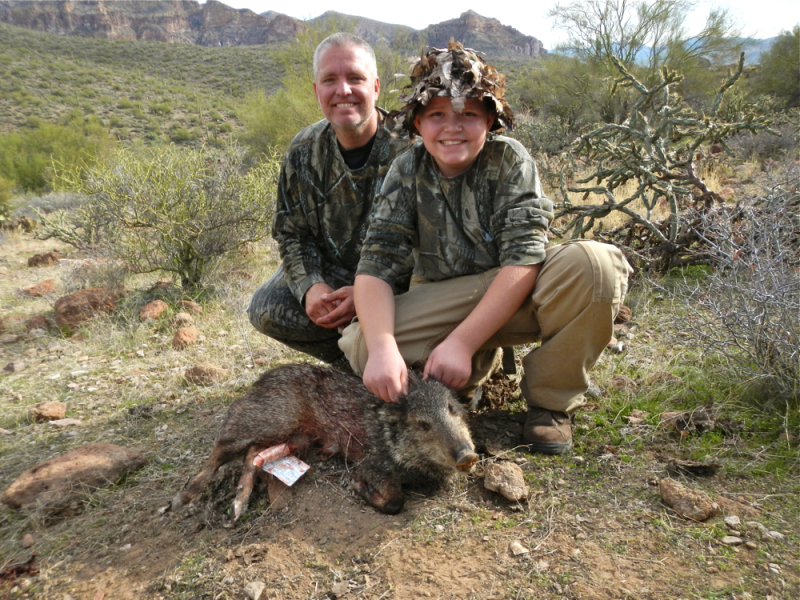 We were all excited and cheered Brook on over the radios. We met up and made a game plan for the Utah boys. Half the group went high to glass while the other half stayed low and drove washes looking for more pigs. An hour passed with no pigs sighted. We met up at the high point and decided to split up again to watch different areas. As we started to leave Mike calmly said, “I got pigs”. He spotted a small herd working towards us down a few hundred yards. I quickly readied the boys and we started the long stalk.

Javelina dont see well, they hear ok, but their noses tell all. We made sure the wind was in our faces and the two hunters and I carefully worked down a draw to put us even with the pigs when we would eventually crest the draw and move in for a shot. Things worked perfectly. Carson the younger of the two boys would be first to shoot. Clayton would then pick a pig Carson was not shooting at and go for it.

As we crested the ridge I had the radio to my ear. Mike sent one more excited instruction, “you are right on top of them”. Seconds later we heard scurrying and six confused Javelina stumbled up the hill 40 yards in front of us. They stopped and looked back. I whispered to Carson which one to shoot and the melee began. Carson shot and the bullet went right under the big sow. 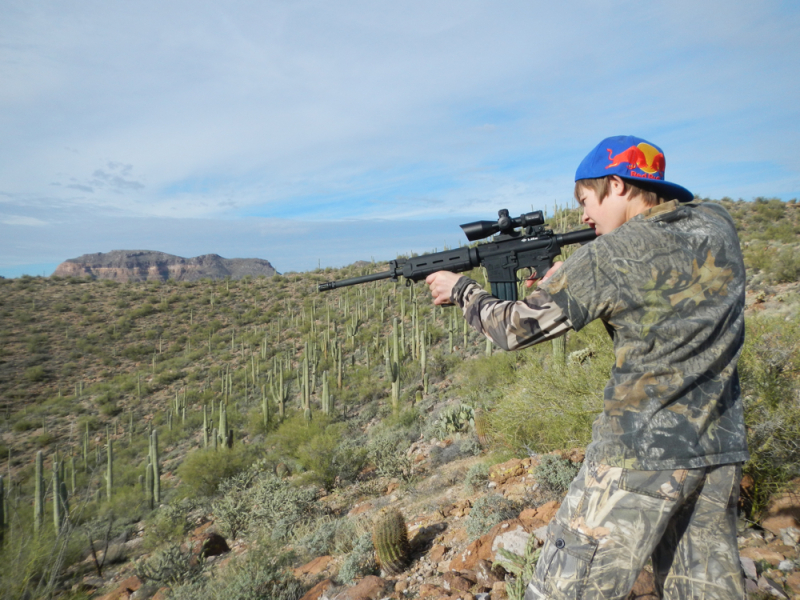 Within a second Clayton fired and the next biggest pig reared backward and fell dead without taking a step. I put the binos up and followed Carson’s pig. We agreed on which one he shot at and he fired a second time. Another miss. Carson is 13, he’s shot a lot of guns and killed a few animals already. He made the smart choice to sit down and take a few more seconds to aim at this point. The Javelina was now 150 yards out and stopped for a moment. Carson pulled the trigger for the third time and we watched as the bullet skimmed the top of the pig and blew dirt in every direction. It was at that point that I knew he’d get her with the next shot and just hoped the pig would stop again. 40 yards further out, now nearing the top of the hill and disappearing for good, the pig stopped. Carson was on her and this time his aim was true. The pig crumbled and we yelled, “YOU GOT IT!” The dads a few hundred yards behind us yelled over the radios and the boys were both smiling from ear to ear.

As soon as the second pig went down and we let out our cheer I said something about my knees shaking and being nervous. “You’re nervous! Carson replied. What about us!? We’re the ones shooting here!” It was all so exciting, the spot, the stalk, the dads watching us getting closer and closer, and the then shooting. My first son will be born in June and I instantly starting thinking about how before I know it he’ll be out hiking the hills and hunting with me like I did with my dad.

We made our way over the the pigs and took a few hero shots. 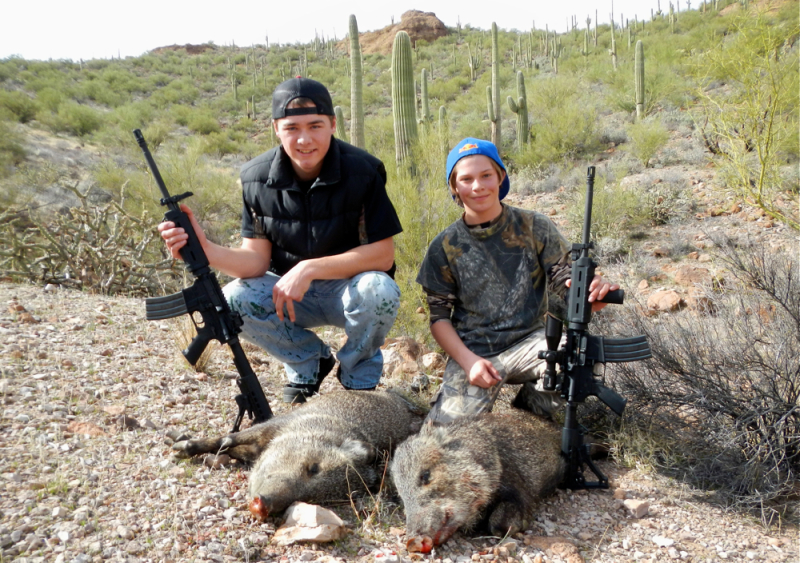 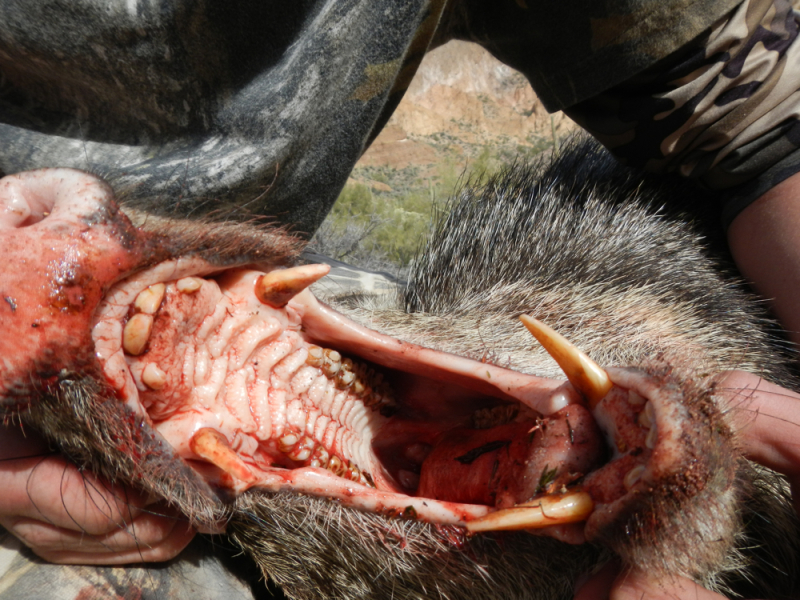 With temps in the 70′s we hurried and removed the guts and hiked the pigs out to the waiting ATV’s. Three tags filled before noon was more than I could have asked for. Everyone was on cloud nine. Back at camp we skinned and quartered the pigs and got them on ice. We loaded up and headed back to my house for some much needed rest. The next morning we had plans to head back out and hunt some quail. A front moved in overnight though and it was raining buckets when we woke up. We decided it was not worth waiting around for the rain to stop so they packed up and headed home.

I got a text from Hazard the next day. “I sure miss Arizona plowing snow this morning.” I think they’ll be back again next year. 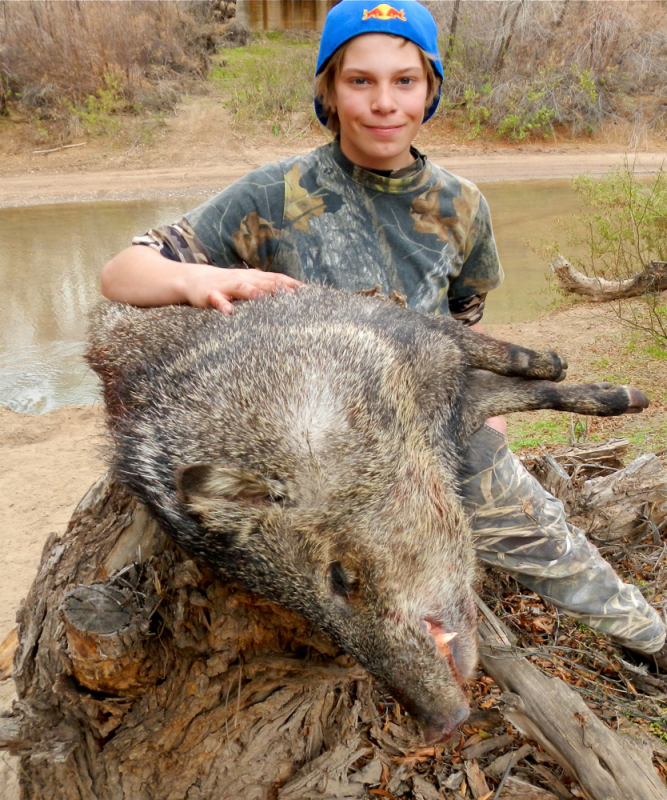 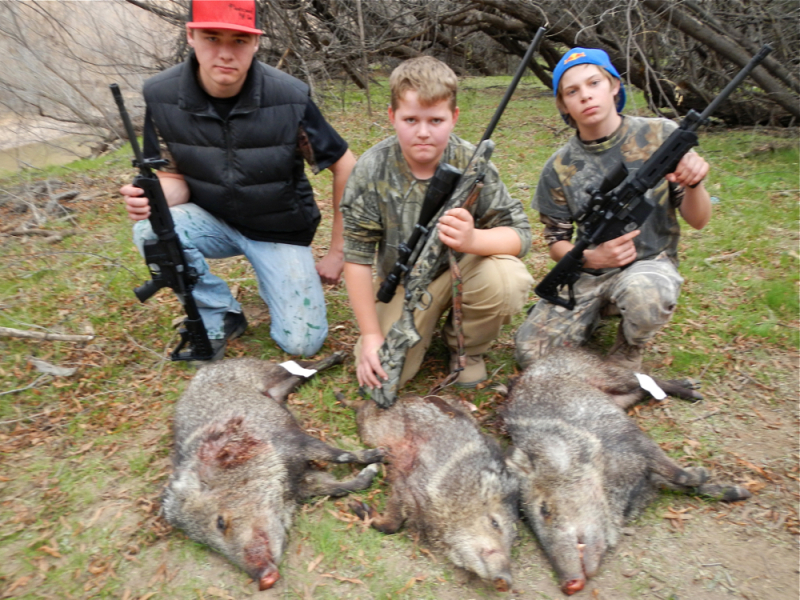