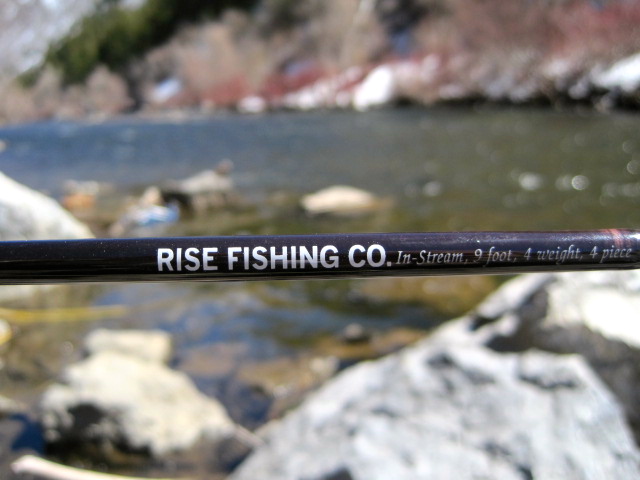 Had the chance to get out on Utah’s Lower Provo River this afternoon and test out a new 9′ 4 wt from Rise Fishing Company. It’s a really pretty rod who’s color I would describe as chocolate burgundy.

I had hopes this rod would be long enough to be a good light nymphing rod but have a toned down action to make any fish a joy to play. The rod proved itself very well. On my first good drift I picked up a nice Provo Brown on a small nymph under an indicator. The fish posed for a quick picture and shouted “RISE FISHING for all”

The fish turned downstream and bent the rod nicely. I liked that it bent most of the way down the rod but still had plenty of backbone to bring the fish back up river to hand. The extra length helped mend the line in the changing current.

As the temperature climbed a degree or two and the sun was at its highest point, out came the bugs. First a few here and there, then dozens. Soon the water had many medium sized blue-winged-olive mayflies littering its surface. The fish took notice and started crashing the top.

The rod preformed excellently throwing the dry flies with tight reaching loops but delicately placing them in the feeding lanes. It was just the initial voyage of this trout rod but it will get some serious use in the future. My very favorite thing about it was that it felt like a 4wt. Not too fast, not too slow. Some power but no broomstick feel by any means. Just exactly how I picture a 9′ 4wt to feel. This is something that I feel has been lost as graphite fly rods have improved.

Finally the packaging is great. The rod tube has individual compartments for each piece, thus eliminating the need for a rod sock and saving time when assembling and disassembling the rod. Good good stuff.