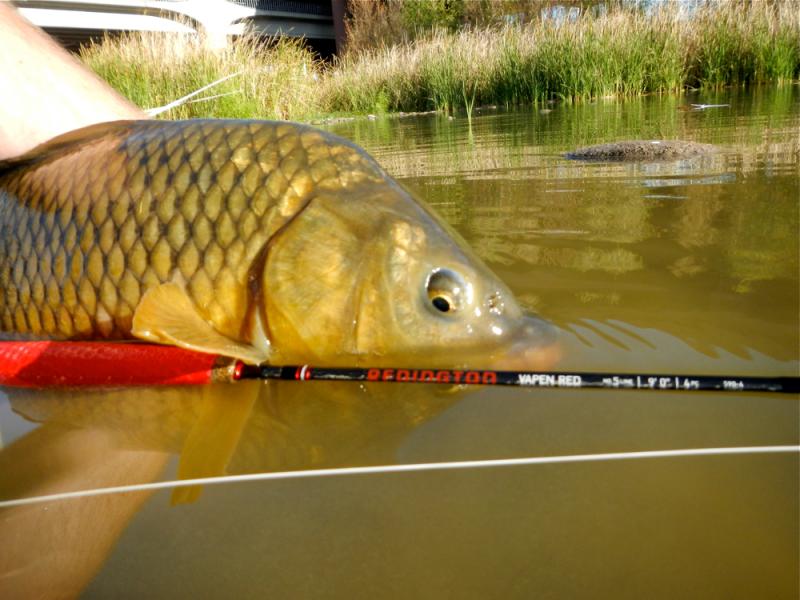 We live in an age of improvement. Seems everything just keeps getting better. In fly fishing i’ve often wondered why we build these super high modulus graphite fly rods and then add a grip made of cork. Cork is awesome, for about three trips, and then it starts to deteriorate. The filling falls out causing pits, the cork dirties easily, and then chunks start to fall off.

I’ve often said, the next big thing in fly fishing will be composite grips that dont wear out. Traditional fishing rods have already started to utilize such materials in a few high-end rods. Redington is stepping into the game as the first major manufacturer to sell a line of rods with a composite grip. They sent me a sample in 5wt to try out and give some feedback on. This morning I got out and put it through the paces.

It’s definitely different looking. The grip jumps right out at you. Redington teamed up with renowned golf-club grip company, Winn Grips, and produced this unique grip. 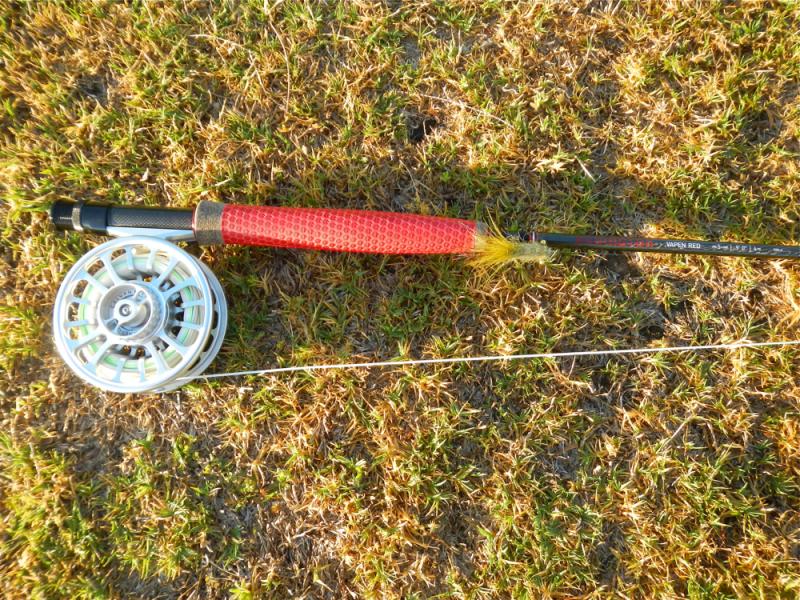 Punched throughout the entire grip are little Redington logos which is kind of cool.

Redington says that the advanced polymer wont slip when wet, feels soft, and is easy to clean. I was worried that it would cause problems like blisters but after casting it for several hours I found their claims to be true. Its pretty soft for a composite.

The rod uses another technology new to the industry. In place of graphite it uses strips of super-high density carbon which are laid across each other in an “X” pattern. This helps with vibration dampening and makes for a stronger rod.

Well, I sure tested it today. I arrived early this morning at one of our local urban carp fisheries near Arizona State University. The flat was full of fat happy commons. 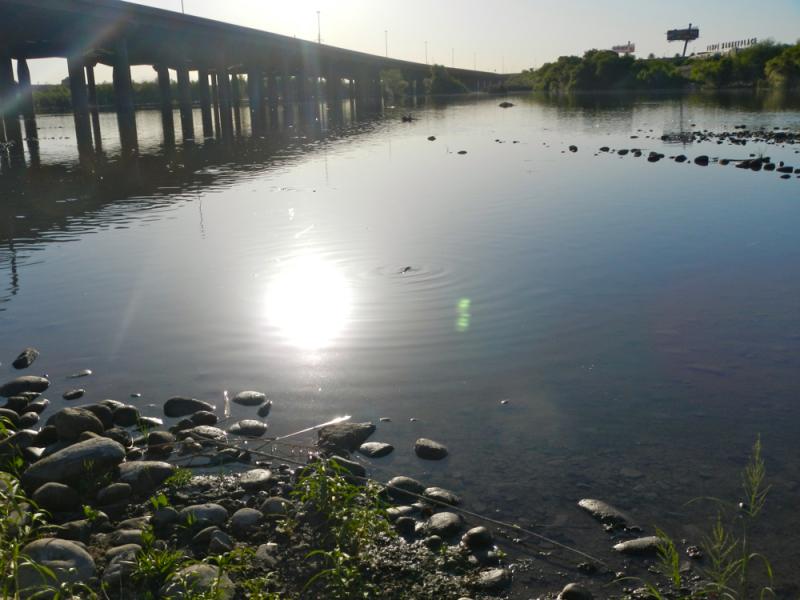 Before too long I got one of them to eat and I reefed on the big fish with the 5wt rod. “Drive it like a rental”, I said to myself haha. 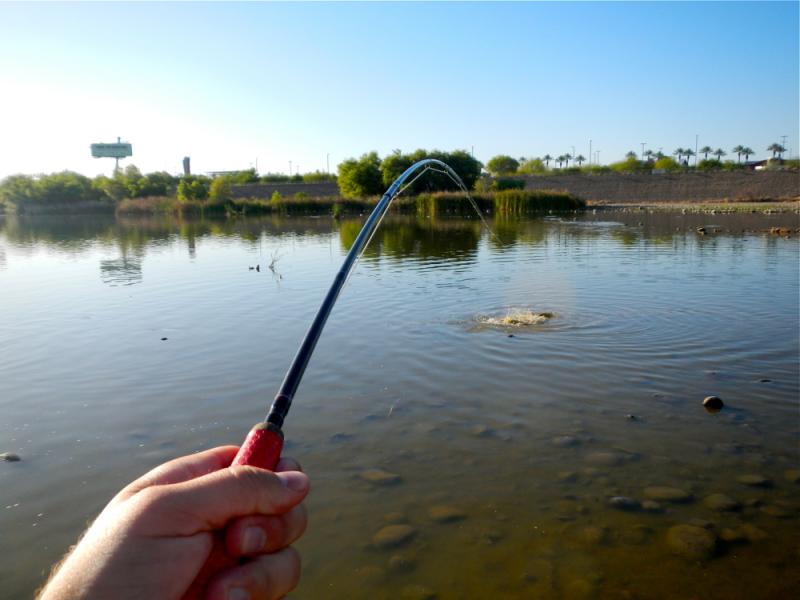 The rod held up just fine and in a few minutes the fish was in the shallows ready to say “cheese”. 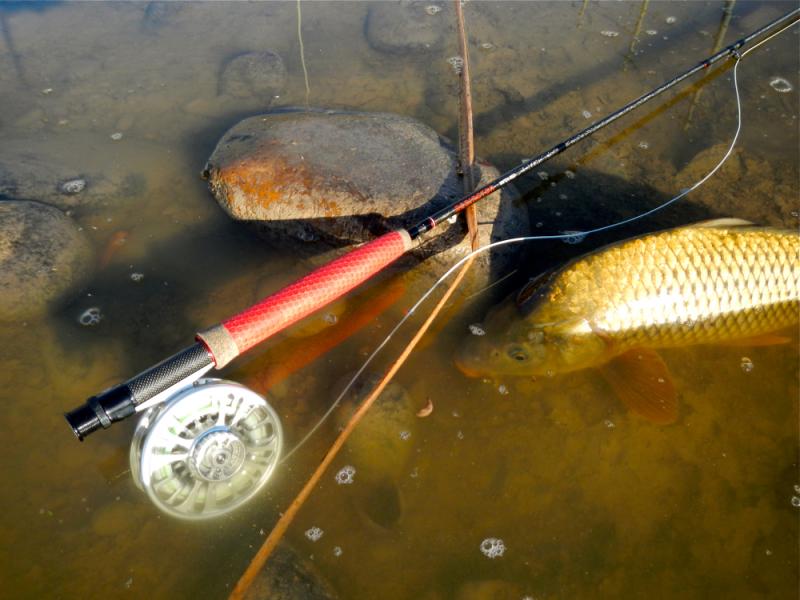 I whipped a couple more after that. I am always skeptical of new things but I have to admit, the rod did its job perfectly. 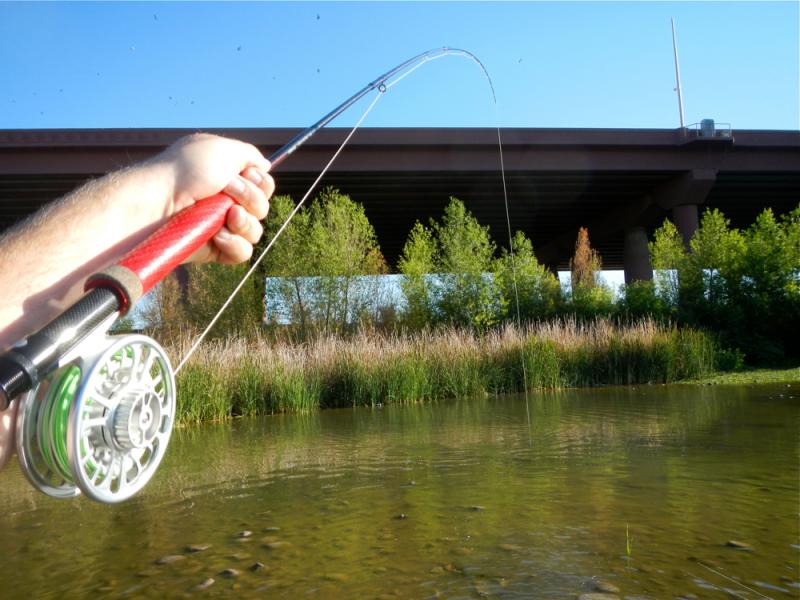 The name of the rod, Vapen, is swedish for weapon. Redington says you don’t cast this rod, you fire it. It is a very “punchy” rod. It doesn’t really like to cast under 20 feet. I was using a RIO Indicator line today and found it to be a good choice for the rod. I think a RIO Grand in 4wt would be my second choice.

On the way back to my vehicle I decided to see how far I could cast it. I wasn’t fresh, having fished and landed several big carp, but standing on a cement dam I was able to shoot about 65-70 feet of line. Not quite as much as my Scott S4 but this rod also retails for about half as much ($349). I quickly stripped in the line to leave when all of a sudden I came tight to a fish. I pulled hard on the fish and felt the tell tale wiggle of a channel catfish. 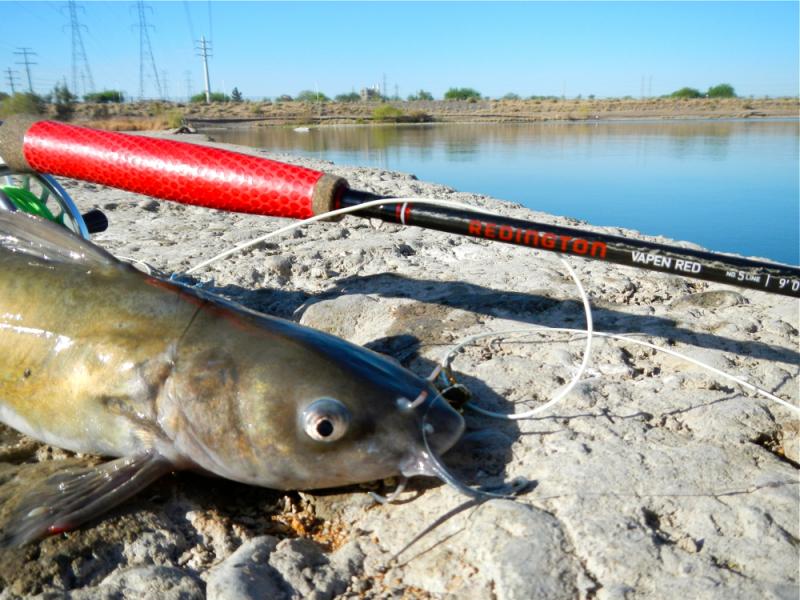 Channel catfish are a perfect fish to test a rod for vibration dampening. I could definitely feel the fish wiggle but the rod was not bouncing all over the place. I was impressed. Now, I know that one morning fishing with a rod is not going to offer all encompassing, long term data. Thats not was Redington asked. I simply took the rod out for a test drive. I didn’t baby it or go easy on the fish and it held up nicely. Overall I think Redington did a great job with this rod. In August they will be available to the public in 3-12 wt. As mentioned above they will be available for $349.99 for the version I tested or with a more traditional cork handle for $299.95. A big thanks to Redington for letting me demo this one. They’re going to have a hard time getting this one back from me in a few weeks.