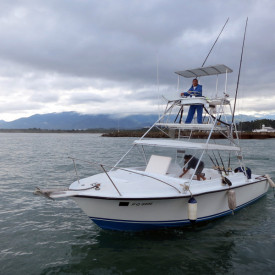 I’ve really missed blogging. Balance is a hard thing to find sometimes with so many things pulling you in different directions. I cant complain though, I have two healthy kids growing like weeds, we are building a new home, and I’ve been extremely blessed in my business this past year. I’ve been fishing a bit through all the chaos but not as much as i’d like.

Tonight I realized that I haven’t even blogged about my trip to Costa Rica. Central America is special to me. I spent two full years of my life in Guatemala. The people of Central America, for the most part are really warm and welcoming. So when Dad called me and invited me to do an offshore trip to Quepos I was ALL IN.

We arrived on the redeye and stepping out of that airport instantly brought me back 10 years to my time in Guatemala. We hurried down out of the capital city and into the coast. Awe inspiring nature everywhere.

We fished with Quepos Fish Adventures and our plan was to fish offshore for two days for Mahi and Sailfish then spend one full day inshore where I hoped we’d be lucky enough to catch a Roosterfish and cross that species off my list. Both days offshore we found great success for Mahi. The captain found a current line with a ton of floating debris and it didn’t take very long at all driving along that before fluorescent green Mahi with deep blue colored fins were destroying the offerings we had for them.

We spend the next day exploring local must see attractions. In the morning we took a guided photo tour through famous Manuel Antonio National Park. Johan Chaves came highly recommended by my sister who had vacationed there and he didn’t disappoint. On our short walk we saw all sorts of amazing wildlife including all three species of monkeys that inhabit the park.

Also, during a non fishing day we drove out to Nauyaca falls. We rode horses a few miles back to the falls and had great service from the family that runs that tour as well. The falls were spectacular! Super refreshing swim in the cool waters after a long horse ride.

We were back on the water the last day before we were to fly home. I could have gone home totally happy without catching that Roosterfish with all the amazing things we had seen and done. I was still hoping though, that we might get that fish that’s occupied so much of my brainwaves since finding out they existed. Fall is the rainy season in Costa Rica. It rains nearly everyday and the rivers pump loads and loads of sediment into the ocean for months on end. The inshore waters were murky and green. I wasn’t expecting much but I was still staying positive. We trolled around for hours and hours. The rugged coast was breathtaking, the fishing was slow.

With an hour left of fishing we hooked into something. The captain shouted, “Gallo!!”. Dad jumped on the rod and held on as the strong fish peeled line and stayed deep. After several minutes the mighty Rooster appeared and the captain had him in the boat. I snapped a couple photos of Dad and told him how stoked I was for him!

The fish swam away unharmed and now we were down to 20 minutes until the trip was over. I had thrown in the towel but the guide stayed positive. Within minutes we were fast to another one. I have caught something like 75 species of fish at this point. This Rooster pound for pound was the strongest I’ve caught so far. Not blazing fast runs or anything, just raw, strong, heavy power. Finally I was able to get the fish the surface and once in the boat, I took full advantage of the famous grip and grin.

I couldn’t believe it the whole way in to the docs and for the next several days. Heck, even now, months later, the whole ordeal seems like a really great dream. We headed back up to the capital, making one stop for fresh fruit. It was as good as it looks.

That night I called one of my dearest friends Esteban Lobo. We met during my time in Guatemala. He’s from Costa Rica and is a successful businessman there now. He knew we were coming and within a half hour was at our hotel. He showed us all around the capital city of San Jose then took us to an awesome restaurant overlooking the entire valley. English is his second language but he speaks it better than I speak Spanish and I think it was kind of nice for my Dad to get to join in the conversation after listening to me speak Spanish for a week straight. A huge thanks to my Dad for making this trip possible and for always being up for any adventure. We’ll be back to Costa Rica to get a Sailfish, the people, fishing, and food were all too good to us for us to not return. As they say down there, hasta pronto.