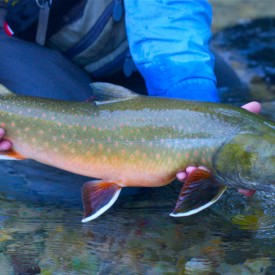 Char are like trout, only better. Don’t get me wrong, I enjoy catching stillwater Rainbows, river Browns, and willing Cutthroat as much as the next guy. But what really get me excited are Char. They come in a wide range of species like Dolly Varden, Lake Trout, Splake, and Brook Trout of course. Char have dark bodies and light spots unlike trout which have light bodies and dark spots. Char fight hard. And perhaps best of all, they live in cold, clean water. The places Char call home are always breathtaking.

I’ve caught all of the above mentioned Char, but when my friend Derek from Outsmarting Fish invited me to come up North to chase Bull Trout with him, I knew I had to make it happen. Bull Trout, like Brook Trout, are misnamed. They’re called trout but they’re really Char. Bullies share pristine Northern waters with healthy West Slope Cutthroat. They are aggressive fish, known to rocket up and grab hooked Cutthroat right off your line. Most of the year they inhabit deep lakes eating other fish. The summer months bring them up the rivers for an annual migration and subsequent spawn. This is when they are more easily targeted with a fly rod and this is why we planned this trip.

On a scorching August Friday fellow Arizonan Matt Harrison and I boarded an Allegiant Airlines flight to meet Derek in the cool green summer up North. We arrived to first rate service. Derek picked us up and drove us straight to a great burger joint where he insisted we order Huckleberry shakes made with fresh Huckleberries from the surrounding area. They were amazing. What a start to our adventure.

The next morning we awoke early and made our way to the rivers we’d be fishing the next few days. Derek wanted to let us cut our teeth on some smaller water first. We waded and threw dries to hungry Cutties that tore up our buggy imitations. The water was perfect and so were the fish, with the exception of this first fish. I think a Bully got a hold of him recently.

The first water we hit was a lot of shallow riffles and dry flies were it. As we approached a different part of the river the holes got deeper and so I switched to a nymph rig and drifted a single SOS nymph through a deep run. The indicator hesitated and I brought the three weight to attention. An insane battle ensued and when Derek finally got a net under the fish I was rewarded with the Cuttie of the day.

With the sun disappearing we made our way back to camp. We set up a crude shelter with some tarps and slept hard. I couldn’t believe the trip was just going to get better. The next morning we broke camp and headed up the canyon in search of Bull Trout.

Derek took us way upstream and we hiked deep into a steep canyon. Derek warned me that the river I was about to fish would haunt me. He told me that I’d think about it while I was fishing other places and that i’d catch myself day dreaming about it. I have. The hike was steep but we made it and when we did I was literally in awe.

Derek pointed out Bull Trout lined up in the deepest parts of the run. Once my eyes adjusted I started to be able to pick out fish. The white fronts of the fins which Char are known for started to stand out against the rocky bottom.

We got to work throwing big heavy flies on the eight weights.

Beginners luck kicked in and I was the first to hook up. The fish bull-dogged repeatedly and bend the eight weight nicely. After a bit of this we got a net under it and I crossed another Char off the list!

My fish was soon followed by several for each of us. Everything came together, the river had fish where they were supposed to be, the right flies were tied, and we saw very few other people and almost no one fishing for Bull Trout. They can have the Cutties, we were there for the Bulls.

We fished until we feared darkness in that deep canyon then hiked straight up out of it. On such a high the hike seemed easy and we ended up at a new camp before dark. We built a fire, cooked some hot food, tied some flies and were all in a euphoric state about the days events.

The following day was spent hiking in a few miles to spot about five miles down river from the canyon section. Here we found a bigger, more open river and because the spawn is a bit late this year, we found more fish in this lower section.

So many fish in fact that we claimed the best run early each day for two full days. The action wasn’t fast but many fish were hooked, and big fish too, through out the two days spent here.

When the action slowed and I couldnt stand watching fish rise I would give in and tie on large attractor dry flies to imitate the giant Drakes that were hatching. The Cutties loved this.

Day two on this run brought a young bear by, more big fish for all of us, and my biggest fish of the trip.

A truly incredible time spent in one of the most beautiful setting and with great friends. A huge thanks must be said to Derek for all the help and Matt for the great company and most of these stunning photos. He is a wizard behind the lens of his Nikon. Thanks for reading.