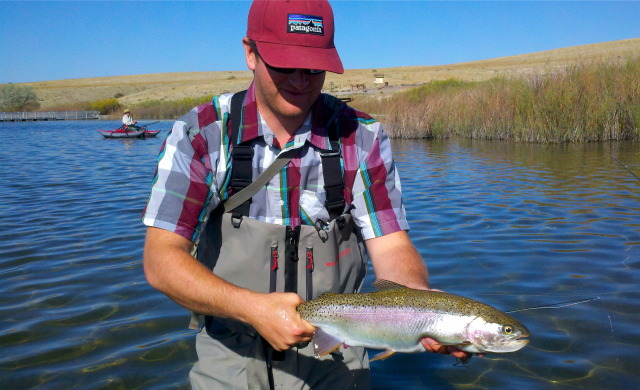 May continues to bring above average fishing. Yesterday was spent with Kc and Kirk fly fishing in Arizona’s White Mountains. The Whites are like a whole different world from the desert heat of the valley. There were several times where I asked Kc, ” are we really still in Arizona?” The high country brings relief to the scorching heat and drab urban life with its panaramic views, green forests, and cool air.

At 3:00 am the alarm sounded and I pulled myself from my comfortable bed. Within a half hour we were all in the car, inflatable boats loaded, and trout on the brain.

We arrived at our first destination a few hours later. As we unloaded the car I realized that I had forgotten the seat to my pontoon boat. Without it the boat cannot be assembled. Four hours from home and feeling very frustrated I thought quickly and emailed a member of an online forum who was to meet us later in the morning. It was a long shot but I hoped he would get it before he came from his home nearby and that maybe he had a spare float tube I could borrow.

I assembled the 5wt anyway and waded out to cast at some fish I had seen cruising close to shore. It didnt take long before I was fast to a 20″ Rainbow. The fish thought my bloodworm fly looked close enough to the real thing and once hooked leapt several feet in the air and then peeled yards of fly line on two separate runs. “Am I in Arizona?”

Shortly after this the forum member showed up and to my surprise there was a blue float tube strapped on top of his rowboat. This was the first time I had ever met him and his help to basically a stranger was humbling and appreciated. The boats were launched and we headed out to productive shorelines around the lake.. we all caught fish. Fishing was not fast but we all hooked up with nice fish which fought well making us remember why we woke up so early and drove so far on a day trip.

After a few years of fly fishing you tend to start to want to catch them the way you want to. Kc is a hardcore streamer guy and was determined to get a big fish on a large streamer. He fished for a most of the morning with this rig with only small fish to show for it. When he was ready to give in and hang flies under an indicator it happened for him. Something big grabbed his fly and forced the rod down and into the water. The line broke and left us all wondering what monster he had a hold of for a few seconds. I’m sure he’ll be back to find out later. Here is one of the brazen little guys that did end up in Kc’s net.

With more water to explore we left the lake around noon and headed to a pretty little creek in the heart of the Whites. The Wallow Fire burned in this area for nearly a month last year. The Apache Trout restoration project literally went up in flames as more that 500,000 acres burned. The evidence of the fire was very apparent as entire hillsides along our route were left looking like spent matchsticks.

We continued on, hopeful that the creeks were spared. Things looked ok when we got there. The fire for sure passed through the area but not all of the trees were lost here and the water looked good. We hiked in about a mile and started fishing. Fish or no fish, it looked beautiful.

The fishing was good. We caught mostly Browns and then fished a nearby creek for Apaches.

Wandering around the higher elevations of Arizona is great. Nature is resilient and though it will be years before the forest is what it was before the fire, it’s nice to see that many good things were not lost in the blaze. I can’t wait to head back up in the coming months.