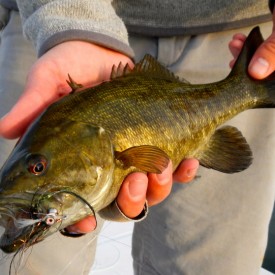 First some history. The Salt river runs west from the tops of the White mountains down steep and formidable canyons before emptying into this giant flat valley that is the greater Phoenix area. Long before any of us desert dwellers were here, the Native Americans used this area. They hunted and fished in the Whites during the warm summer months then retreated down here to the pleasant winters of the valley where they grew crops along the salt river.

They were, in effect, “snow birds” as we call them now. The difference is that the path of the Salt river is not as easily navigated as a plane ride into Sky Harbor airport.

Us foreigners have made some changes to the Salt river. To accommodate the several millions of people living in the greater Phoenix area, we built four dams along the Salt. From top to bottom you’ll find Roosevelt Lake, then Apache, Canyon Lake, and finally Saguaro lake. I’ve been to three of the four but this weekend I was able to fish the only one I had not visited.

Manny Chee invited me and Kc to fish Apache. The fish and game stock rainbow trout through the winter into almost all of the lakes and ponds of the area. Their goal is to provide a fishery for those who want to fish through the winter months. A secondary result is that the Large and Smallmouth Bass have figured out that these stockings mean easy food. On stocking days one can witness freshly stocked, terrified trout literally launching themselves out of the water with huge bass sailing right behind them.

The fish and game doesnt announce the exact day this will happen but they have a calendar stating the week they will stock a lake. Dont get too excited. We were not there the day they stocked the lake. Luckily for us though the bass are used to seeing big offerings and we ended up with some really nice fish for it being December!

The road to Apache lake is not paved. Its a rough dirt trail that follows the path of the migrating natives. Great cliffs rise from the the lake’s shores which were seen by the natives as they walked that long path to literal greener pastures.

We started out along a rocky shoreline. After seeing a few small, bright silver shad dead on the surface I picked out an ever reliable black and white clouser minnow from the box. I’m trying a new line on one of my heavier rods. Its a floating line with a 10 foot long section at the end that sinks at a slow rate. Within a few minutes I had some chunky Smallmouth to the boat.

We fished through the rest of the morning, trying different spots with not much luck. It is december so any bass are an appreciated thing at this time. We had a nice meal on shore, loaded the boat back up and hit the water again.

The other guys had the hot hand in the later part of the trip. Kc caught the fish of the day off a wind blown point. A really nice female Largemouth.

I had a really nice Largemouth follow and swipe at the big streamer near a boat doc. I got excited and set when I saw her mouth open on the fly. She didnt even have it in yet. My bad. Kc finished things off with a good one.

Satisfied with the days work we left the lake and headed back to the valley. An amazing sunset lit up the canyon one last time as we drove out of it. On the way home we stopped at a hole in the wall mexican place that serves up delicious smothered burritos. It has a longer name but the locals just call it, “burger house”. Then Manny rigged his iPad to the windshield, set the bluetooth to play audio over the truck speakers and we enjoyed three hilarious shows on the way home.

I’m grateful for our modern accommodations. Its nice to jump in a truck on a day trip, cruise 60 mph in Mannys boat up and down the lake, stop for good eats on the way home, and watch shows on the way home. But being up there in that canyon makes you reflect on the hard life others lived before us. Puts a lot in perspective for me.